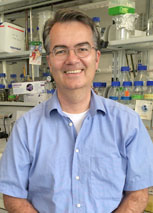 Kay Schneitz studied molecular and cellular biology at the Biocenter of the University of Basel in Switzerland (curriculum Bio II). He did his diploma thesis with Prof. Werner Arber on site-specific recombination in E. coli. He then moved on to do a PhD with Prof. Markus Noll, now at the University of Zurich. During this time he studied the molecular and genetic basis of limb development in Drosophila. In particular he worked on the cloning and characterisation of the aristaless and dachsous genes

After his PhD he switched to plants and began working on the model system Arabidopsis thaliana in the lab of Bob Pruitt, then at MCB, Harvard University. He studied the genetic basis of the fertilization process and started his work on organogenesis using the ovules as model system.

In 1995 he returned to Switzerland where he continued his work on ovule development at the Institute of Plant Biology, University of Zurich. Initially as a postdoc and later as an independent group leader (START fellow). In 2001 he was awarded an EMBO Young Investigatorship (EMBO-YIP).

Since March 2002 he is an associate professor of plant develomental biology at the Technical University of Munich. His lab continues working on pattern formation during early ovule development, but also begun work on receptor-mediated signaling and meristem development.